A bunch of panniers hangs on both sides of the bicycles. Most of the space is taken up by camping props and clothing, while the rest is made up of essential equipment and food supplies for several weeks.

An aspect of tonal uniformity emanates from the entire ensemble, suggesting that the veiled effect goes beyond a mere coincidence. The selection was made looking for the attributes of usability and durability, but without a doubt, also of dissimulation. Everything that could have stood out was carefully dyed to an opaque appearance.

If during the next few days someone is guarding the border forests, they will hardly notice us…

And that is precisely the intention. Because we have chosen to follow the strategy of the daffodils, which these days begin to appear from the cold land in search of the first rays of sun; and they do it without asking anyone’s permission, as if defying the icy dominance of a mercilessly long winter.

Only that we, instead of highlighting our presence, will camouflage it. And if finally someone discovers us chasing the spring, we will say that it was them, the daffodils, who incited us to disobedience. 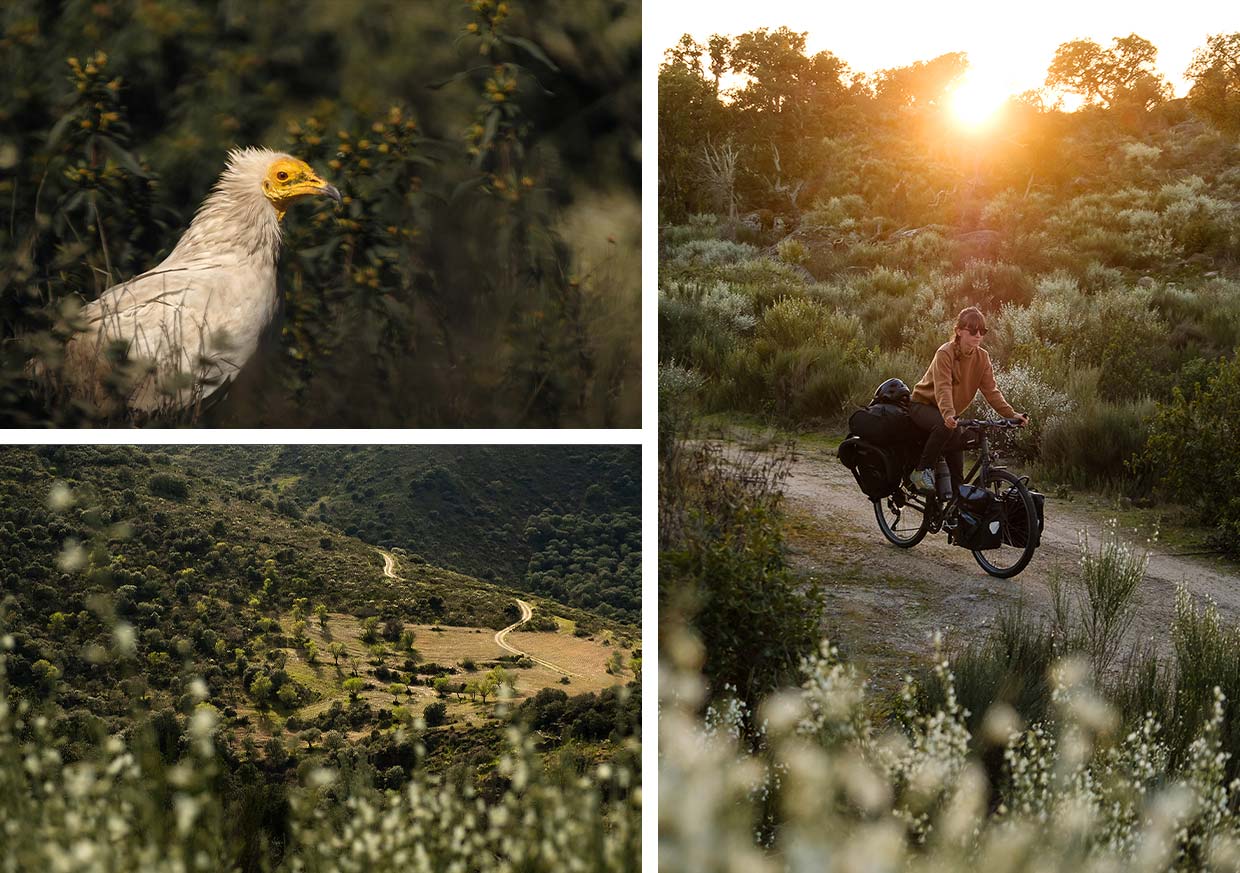 Crossing the border was not difficult, there are not enough eyes for that many paths.

Surreptitiously we slide towards the South, pedalling through a landscape in transition.

The Atlantic woodlands recedes to the Mediterranean forests. The oaks give way to the groves of cork oaks and rockroses replace the ferns.

Here, in the wrinkled region of Tras-os-Montes, surrounded by the buzzing of insects and the chirping of birds, the concept of confinement seems implausible, how could we agree to miss such a spectacle?

“Surreptitiously we slide towards the South, pedalling… ”

The nights get shorter and every morning we wake up a little sooner. Today it was before the sunrise, because in the company of José Jambas, the days do not have enough hours if you do not get up early.

Still at night we light the kitchen and prepare enough food for the whole day. We are going to spend the next ten hours squeezed into a wooden cubicle without being able to get out; so it is better to leave everything well arranged. We pack the photographic gear, the binoculars, the sleeping bags, the food, one bottle full of water… and another plastic one, empty. As I said, it is going to be ten hours.

With the first lights we head down a dirt track towards the vulture restaurant.

After several kilometres a strong smell announces the arrival. Its source is a trailer with six buckets of rotten meat hidden inside.

Jambas puts on the gloves, drags a couple of buckets out, and while dispersing the stinking content, he explains:

«In the Douro International, there is the highest concentration of Egyptian vultures in Europe, with about 120 breeding pairs… However, it is a species in severe regression at a global level, classified as “Endangered” in both Portugal and Spain».

«Poisoning, destruction of habitats, collision with wind turbines and electrocution on power lines are among the main causes of death. But starvation is also a constant threat to the species».

«During the last years I carried out an investigation that concluded in this. – he says pointing around him – The best complementary feed during the breeding season are small pieces of meat in different stages of decomposition, with high density of fly larvae».

He picks up a stone and crushes some bones until the marrow pops out – «All served exactly 8 km from the breeding grounds, to reduce competition with other scavengers».

When he finishes it looks as if a landmine exploded in the middle of a herd of cows. The pieces of meat are literally everywhere.

Then he takes off his gloves, locks us in the hide, and leaves wishing us luck. We get comfortable as best and as quick as we can, throw our sleeping bags over, and keep the camera and binoculars within easy reach.

After a few hours of muteness and stillness, the red kites arrive and, by the time we have filled the plastic bottle halfway, the first Egyptian vulture lands. 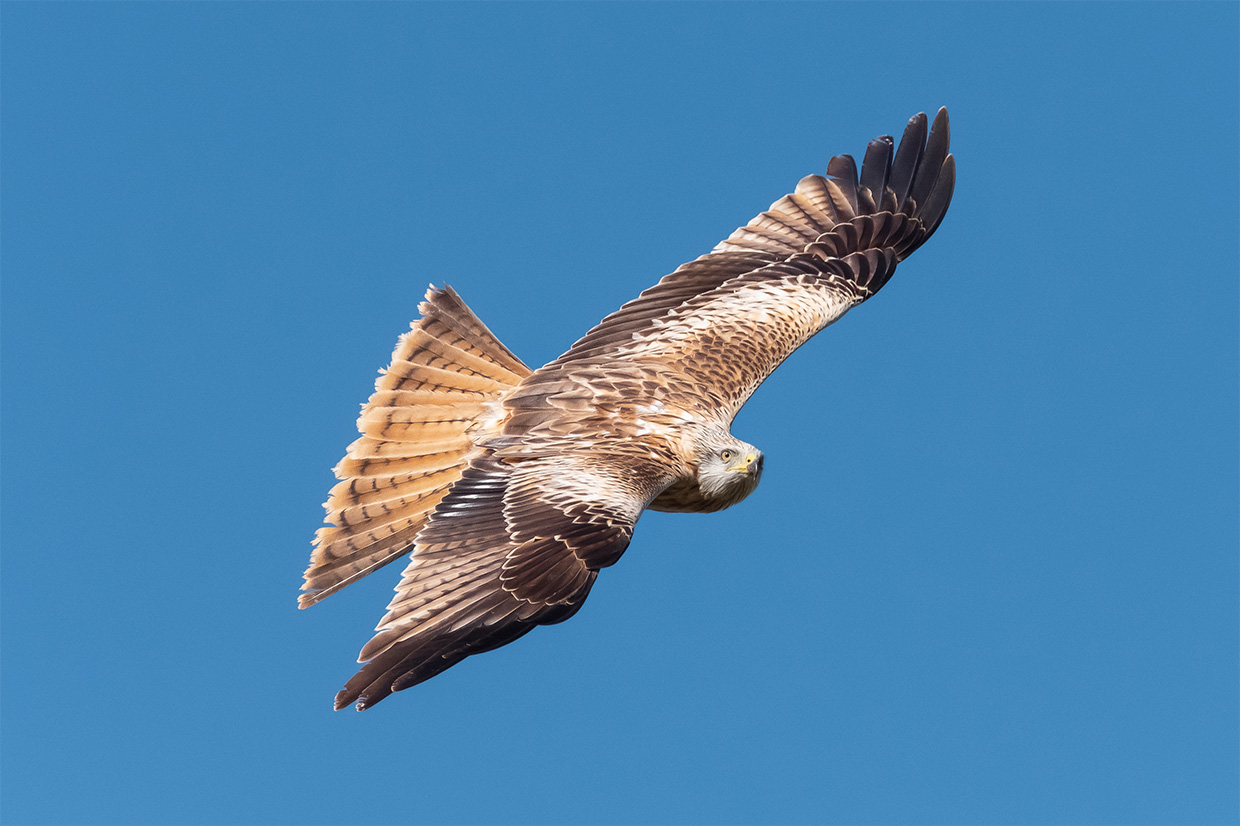 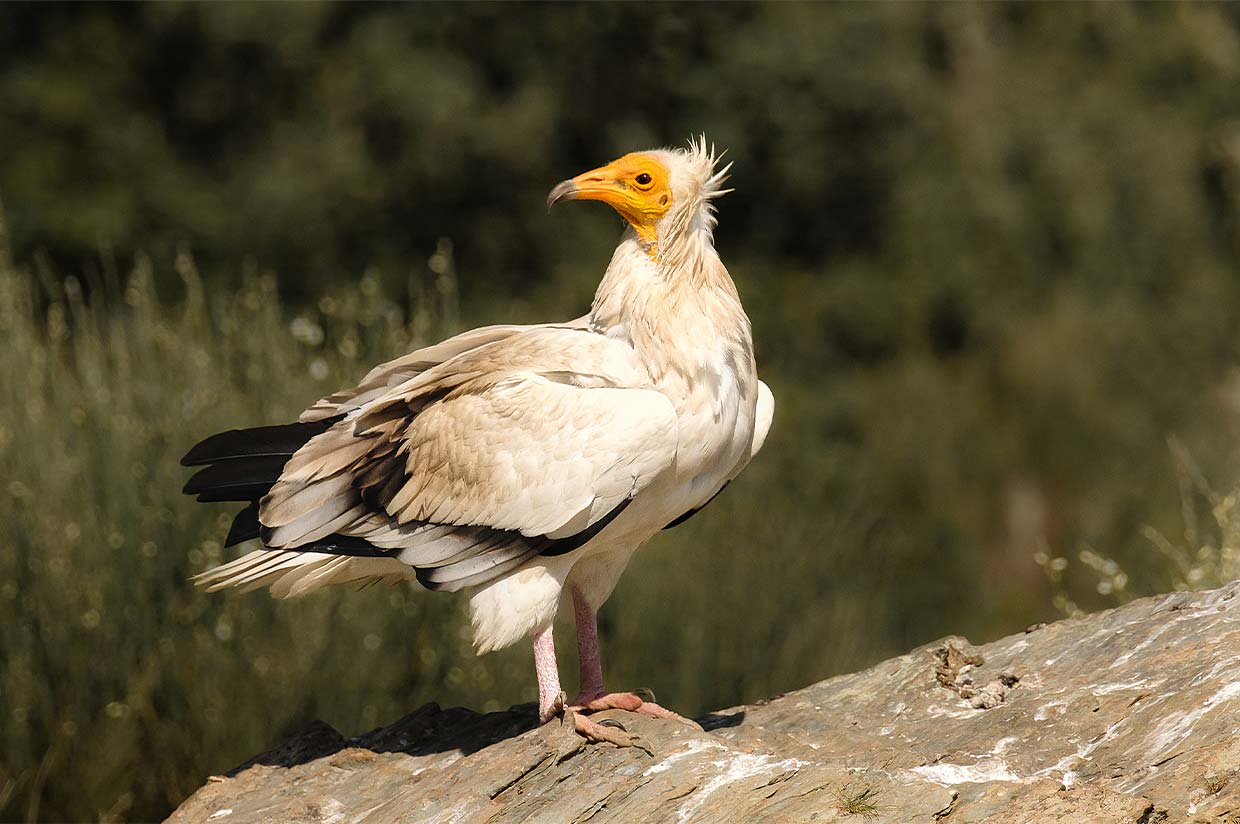 We arrived at the Duero gorges as yet another migrant bird, exhausted, but with the clear intention of nesting in one of the many perches that loom over the river.

After a week absorbing Jambas’ knowledge of local biodiversity, we were excited by the idea of approaching the habitat of the species from a very different perspective.

We leave the bicycles at the ornithologist’s house and lug the backpacks on our shoulders to head to the huge fluvial frontier that, along 112 kilometers, separates the two Iberian countries.

“… heading to the huge fluvial frontier…”

At dawn the cold intensifies. The wind has been blowing all night and the sleeping bags are covered in frost.

After breakfast and having dried the equipment, we look for the safest way to descend the several hundred meters gradient that separates us from the shore.

From the top we locate a sharply inclined scree, apparently the best way to access. But the treacherous rocks slide from under our feet forcing us to cling to the branches of the few junipers that grow between the blocks. Although not pleasant, surely better to have our hands pricked than to roll to the bottom of the gorge.

When we finally reach the shore we open the bags without a moment of hesitation and take out the small black bundle: the packraft. We unfold it, inflate it and assembly the paddles. The rest of the supplies returns to the backpacks, this time securely stored inside dry-bags.

We launch the boat and, before having time to settle inside, the force of the water drags us downstream, towards the heart of the natural park. 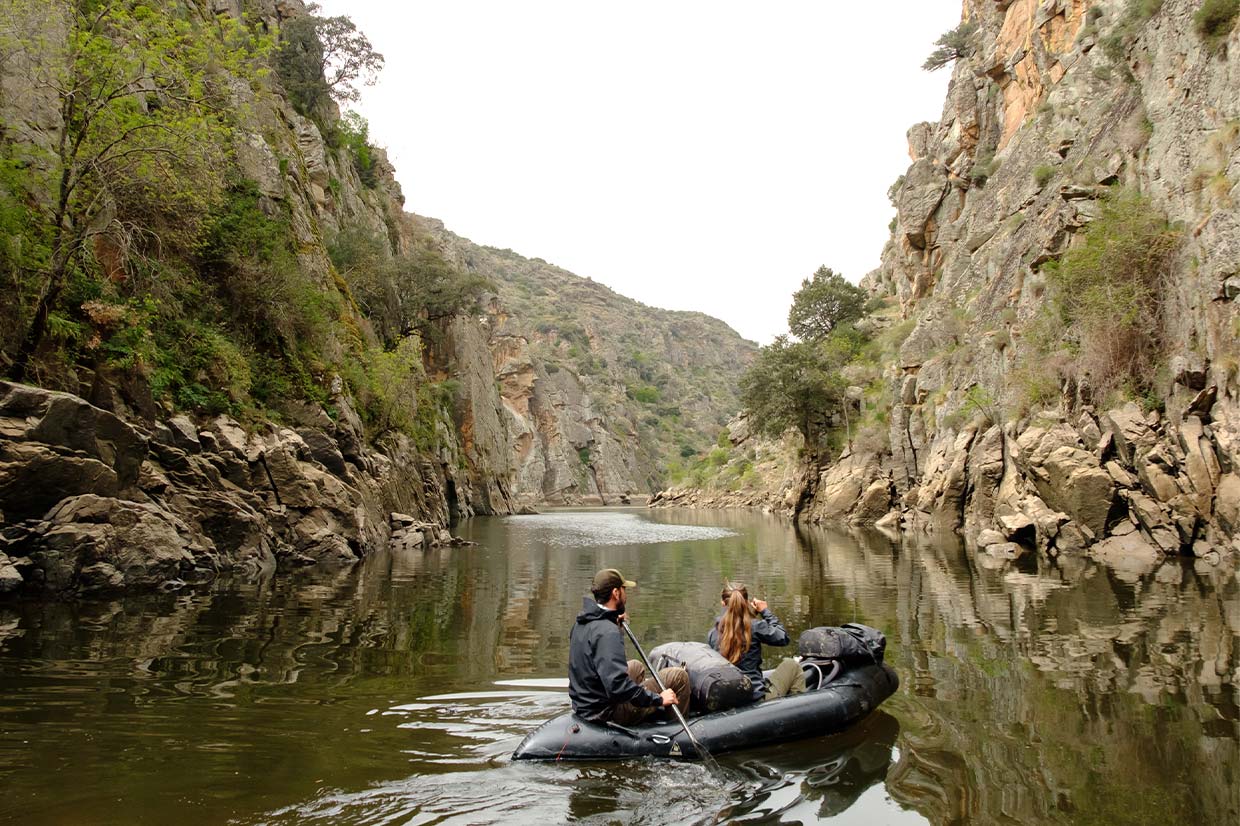 We advance stealthily at the rhythm of the currents, but on this border there is no valid camouflage. Vigilant sentinels, numbered in thousands, scrutinize us from the cliffs.

Egyptian vultures, griffon vultures and black storks. When they fly above us, we can identify their silhouettes by the shadows they cast on the water and sometimes, just sometimes, that silhouette corresponds to the majestic ruler of the heavens, the golden eagle.

If they would deign to invite us, we would gladly fly with them to their shelters. But since they decide not to, every evening we explore the stone walls looking for a platform to occupy overnight.

Arduous task in a place where horizontality was vastly omitted.

“Vigilant sentinels, numbered
in thousands, scrutinize us from the top of the cliffs.”

If you find inspiration reading our chronicles and you appreciate our commitment to the environmental protection, consider making a donation.

Our average expenses over a year are 1,50€/day or 45€/month so even the smallest donation makes a big difference.